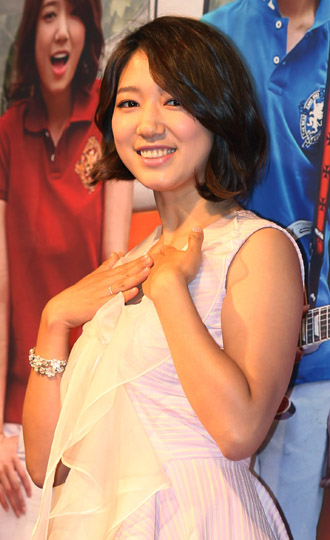 Park visited cosmetics retailer SASA’s outlet to hold a fan-meet during which she signed autographs and was interviewed by the local press. “The dramas ‘You’re Beautiful’ and ‘Hayate the Combat Butler,’ which Park starred in, were huge hits in Hong Kong,” a representative from Park’s agency 4HIM Entertainment said.

“So her popularity is just soaring at the moment.” The agency also said Park was excited about meeting her fans in Hong Kong for the first time and the promotion stint is thought to be instrumental to Park’s career there.

In February, the star held her first Japanese fan meeting and in March, she modeled in the fashion show “TGC Girls Collection.” Park made her debut in 2003, starring in a music video for the singer Lee Seung-hwan.