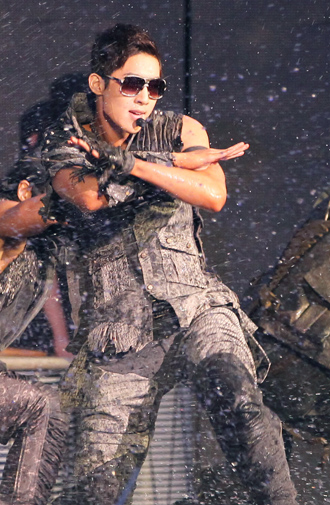 Hallyu singer Kim Hyun-joong has just finished up recording a song written by famed Japanese singer-songwriter duo B’z.
Keyeast Entertainment announced on May 1 that Kim successfully recorded a song titled “Heat” which is set to be released in Japan in July as Kim’s second single.

Kim has long been a fan of the Japanese duo and when at a press conference in Japan in November, openly admitted to being a fan of the group. This prompted Kim’s Japanese distributor Universal Music to consult with B’z in working on collaboration.
B’z agreed and wrote the song for Kim.

“It’s such an honor to be able to work with a group that I’ve looked up to for a long time. They gave me a lot of advice and it was such a great experience,” said Kim.

B’z is one of Japan’s most popular acts. Having debuted in 1988, the duo set a record for topping the Oricon chart 46 times. The fact that this is the first time the duo has produced a song for a third party has garnered much attention to Kim’s song.
By Carla Sunwoo [carlasunwoo@joongang.co.kr]