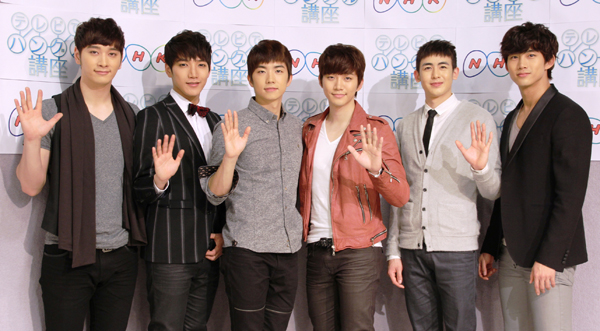 
Boy band 2PM will release a new EP in Japan on June 6 called “Beautiful,” and the band’s agency JYP Entertainment said yesterday that it will soon begin promoting the album.

The title track is already a popular hit in Japan as it was picked to be played in a television commercial for a Japanese company earlier this year. Back in April, the track was also made available on Japan’s leading ringtone Web site Recochoku and was the most-downloaded tune for a while.

Also on the EP, fans can expect to hear the song “If You Are Here,” which was composed by 2PM member Junho.

Instrumental versions of the two songs will be included on the new EP.

Meanwhile, June 6 will also be a special day for 2PM as it launches a DVD that features moments from the band’s first tour in Japan, which attracted more than 100,000 fans. On June 16, the band will also hold a “Hi-Touch” event where fans are given the opportunity to meet and shake hands with the stars.