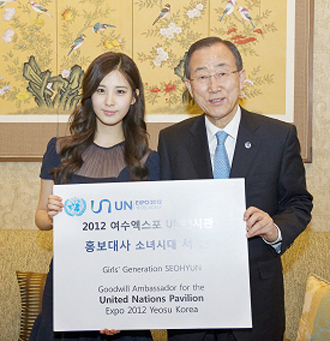 Girls’ Generation member Seohyun has been picked to be the goodwill ambassador for the United Nations Pavilion at the 2012 Yeosu Expo.

On May 3, the UN announced that Seohyun will act as a celebrity spokesperson at the Yeosu Expo, which will center on the theme of marine and coastal protection.

At the event, Seohyun said, “I will try my best to increase awareness about the importance of marine life.”

The girl group member also said that she was thrilled to be presented with the honor by Ban Ki-moon, whom she admires a great deal.
The International fair that Seohyun is promoting will kick off its 93-day run on May 12.
By Carla Sunwoo [carlasunwoo@joongang.co.kr]