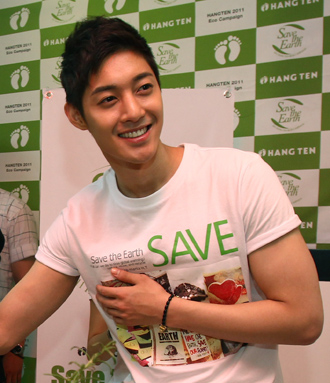 K-pop singer Kim Hyun-joong landed in Singapore on Wednesday for his “Fan meeting Tour 2012” that kicks off today.

According to Keyeast Entertainment, hundreds of fans flocked to the airport to catch a glimpse of their favorite K-pop star. Kim was only too glad to return the love and support by smiling and waving to fans as he made his way into the city.

Due to his busy schedule, Kim didn’t stick around the airport but did take the time to hold a press conference where he talked about his plans for the tour. Press from all over Asia asked him questions about his career as a singer and actor.

Kim’s Singaporean fan meeting, the first the star has held in the city-state, will take place today at Singapore’s Indoor Stadium. He will sing hit songs for those in attendance.

Meanwhile on May 1, Kim finished recording a song called “Heat” that was written by Japanese duo B’z. Keyeast Entertainment said it will be released in Japan in July.