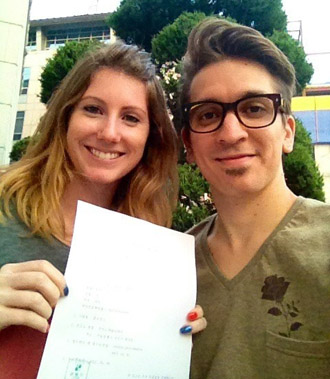 Busker Busker’s drummer Bradley Ray Moore, better known simply as Brad, is officially a married man, he said as he revealed his marriage to his long-term girlfriend over the weekend.

The 28-year-old American revealed the news during the band’s first solo concert at Yonsei University’s Centennial Hall on Friday night and then kissed his girlfriend, Danielle Marie Bacon, on stage. Moore previously told an entertainment news show that the two have been in a relationship for more than six years.

Later that night, the two revealed their marriage certificate on Twitter. They have not yet held a wedding ceremony.

Busker Busker, which released its debut album on March 29, wrapped up its concert tour in Seoul yesterday and will now move to other cities as part of the “Youth Bus” tour. The group, which become famous after finishing as runner-up in the third season of audition program “Super Star K,” will hold concerts in Jeonju, North Jeolla, on Saturday, in Ulsan on May 19, and in Daegu in June 2.