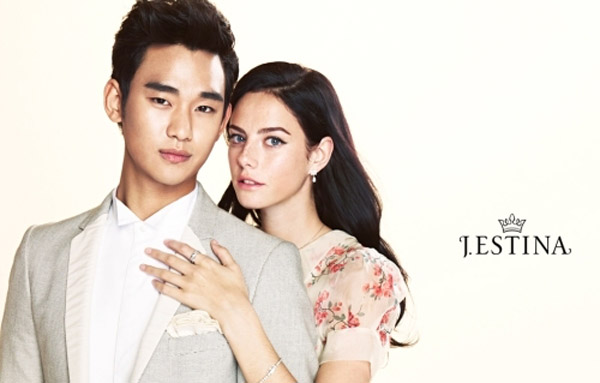 
Actor Kim Soo-hyun got more than he bargained for when he agreed to become the new model for the accessories brand J.Estina.

As a special treat, the brand flew in Kim’s crush, British actress Kaya Scodelario, to do a photo shoot with the up-and-coming Korean celebrity.

On Friday, J.Estina revealed pictures from behind the scenes of the photo shoot where the two stars posed as lovers, and they were some of the most searched online items of the day in Britain.

Scodelario arrived last Tuesday and during her time in Korea used her Twitter to speak positively of the country and post pictures she took with Kim.

“I have fallen in love with Korea,” the star said on Friday before mentioning that she would take a bundle of Korean snacks back home.

The 20-year-old was born of a British father and a Brazilian mother and has worked as a model.

The advertisement featuring Kim and Scodelario will be revealed at various J.Estina stores by the end of May.