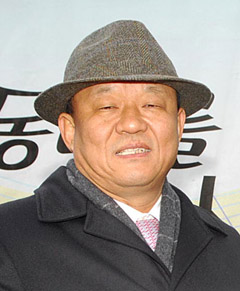 Kim Chan-kyong, chairman of Mirae Savings Bank, one of four savings banks to be suspended over the weekend, was caught Thursday attempting to flee the country after withdrawing 20 billion won ($17.6 million) from the coffers of his beleaguered company.

According to the Korea Coast Guard yesterday, the 56-year-old and four others were caught at around 8:30 p.m. at Gungpyeong Port in Hwaseong, Gyeonggi, while on their way to China. On Saturday Kim was handed over to the prosecutors in charge of investigating the savings banks, while the rest - brokers that helped Kim plan the secret escape - were arrested for violating the country’s Smuggling Passage Act. At the time of his arrest, Kim held a passport and 12 million won in cash.

Kim, along with other major shareholders and executives of the suspended banks, have been banned by prosecutors from leaving the country and are expected to face questioning about alleged irregularities at the savings banks.

The Financial Services Commission suspended Mirae’s operations yesterday along with those of Solomon, Hanju and Korea savings banks for failure to meet the capital adequacy ratios recommended by the Bank for International Settlements.

Coast Guard officials said that Kim and the others who were arrested had been plotting their secret trip since December. They planned to move to open seas on a small fishing boat before transferring to a cargo ship heading to China.

The five of them met several times to secure a boat and also to decide when to leave the country, the Coast Guard said. Kim also allegedly gave tens of millions of won to the brokers.

Coast Guard officials were notified of the plan by one of the broker’s close aides and were on the lookout when they made the arrests.

As part of its investigation into the four suspended banks, the central investigation unit of the Supreme Prosecutors’ Office will attempt to trace the 20 billion won Kim withdrew last Thursday.

“We are attempting to determine the source of the funds and whether there were withdrawals of funds from any other banks,” said an official from the prosecutors’ office.

Prosecutors are expected to request an arrest warrant for Kim for his alleged involvement in giving out illegal loans and embezzlement.

It will also raid offices of the three other suspended savings banks and question related officials about alleged financial irregularities.