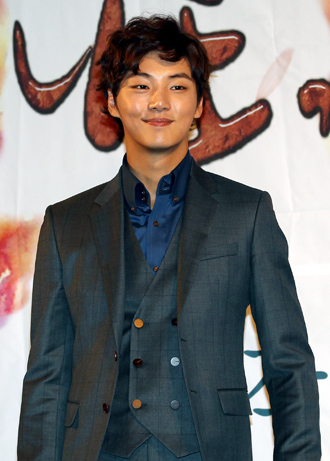 Korean actor Yoon Si-yoon has been cast to play the leading role in a Japanese internet movie being produced by the Japan Apparel-Fashion Industry Council.

A press conference about the project entitled “Brand Guardians,” took place in Tokyo on Friday. Yoon was in attendance to talk about his feelings towards Japanese fashion.

“A lot of my Japanese fans sent me a lot of hats. I always thought that my head was of normal size, but none of the hats fit me. So please, from now on, send me hats that I am able to wear,” joked Yoon.

Meanwhile, Yoon’s co-star, Japanese actress Yu Takahashi, said of Yoon, “Before I met him, I was nervous -- but he was so warm and friendly from the first day.”

Yoon said that he couldn’t wait to impress the Japanese public with his acting skills that he will exemplify through his involvement in the Japanese movie.

The internet feature will comprise of 13 episodes and is based on a story about a Korean youth who travels to Japan to make it as a fashion stylist.

The project was orchestrated by the JAFIC to increase awareness of Japanese fashion and will begin streaming online from October through the official Web site www.brandguardians.asia.