Lee Byung-hun readies for next film

Lee Byung-hun readies for next film 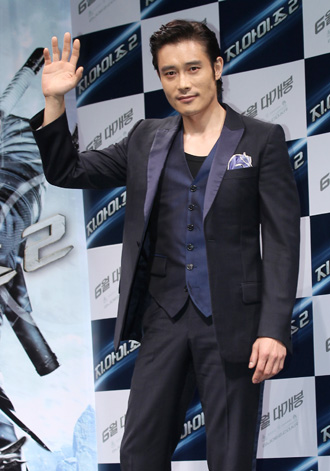 Lee Byung-hun, who is well known in Hollywood for his role in the “G.I. Joe” films, is ready to mix things up.

He will team up with Catherine Zeta-Jones to film the sequel to the Hollywood hit film “Red” (2010), Summit Entertainment announced. Lee will also work again with Bruce Willis, whom he got to know during filming for “G.I. Joe: Retaliation.”

Other big names to join Lee on the set of “Red 2” are John Malkovich, Helen Mirren and Mary-Louise Parker. The movie is set to open in February next year.

The prequel revolved around a character named Frank Moses, a former black-ops agent who reassembles his team one last time to uncover a high-tech assassin who is a threat to his new life as a civilian.

The second installment featuring Lee will be set in Europe and centers on a reunion of retired CIA agents.

Meanwhile, “G.I Joe: Retaliation” is set to open in June.