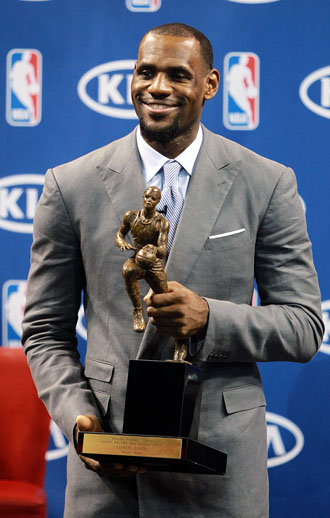 MIAMI - LeBron James spent two days trying to sort out the right words. An assistant jotted some ideas on notecards, which were ignored. So when the moment came to deliver his MVP acceptance speech, James spoke emotionally about family, charity, history and what the Miami Heat organization means to him.

And he finished with a flourish.

“Heat nation, we have a bigger goal,” James said. “This is very overwhelming to me as an individual award. But this is not the award I want, ultimately. I want that championship. That’s all that matters to me.”

James accepted his third Most Valuable Player award on Saturday, making him the eighth player in league history to win that many. The others - Kareem Abdul-Jabbar, Michael Jordan, Bill Russell, Wilt Chamberlain, Larry Bird, Magic Johnson and Moses Malone - all have won NBA titles.

On Sunday, James resumes that quest.

“He’s going to get his,” Heat President Pat Riley said. “He will get his championship. And there might be a lot more there, too.”

James lauded the other top candidates for the MVP, and lauded his teammates and those around him even more.

When the results were released, Durant offered congratulations.

“LeBron, that’s like unheard of for a guy to get three out of four MVPs,” Durant said. “[LeBron is] A good friend of mine. I’m happy for him and of course I would love to have the MVP but at the same time, I’ve just got to keep improving, keep getting better and hopefully I’ll have one soon.”

The way some around the Heat see it, Saturday could have been a fourth straight MVP for James.

His numbers this season - 27.1 points, 7.9 rebounds and 6.2 assists and 1.9 steals per game on 53 percent shooting - are extremely comparable to last season, when he finished a distant third in the MVP race behind Derrick Rose and Dwight Howard.

James understands why. A year ago, following all the fallout that accompanied his decision to leave Cleveland and sign with Miami, James realized there was no way he was going to have voters back him for a third straight season. Long before the results were in, James knew the 2011 MVP wasn’t going to be his.

“I think time heals all,” he said.

Heat Assistant Coach Bob McAdoo won the MVP while playing for the Buffalo Braves in 1975. McAdoo said James had to deal with “absolute hate” last year after his move to Miami, and some believe the repercussions kept him from getting as many MVP votes as he may have deserved a year ago.

That’s no longer a problem.

Abdul-Jabbar was 26 when his third MVP season - out of a record six - ended. James is 27. Riley, the former Los Angeles Lakers coach during the Showtime era, has an affinity for both. AP