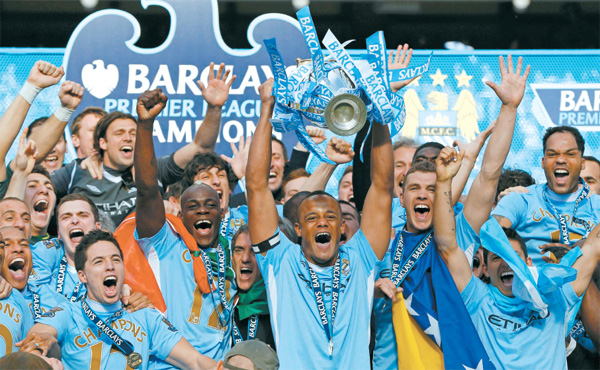 
LONDON - With Manchester City’s dream dying in the embers of an exhilarating Premier League season, Edin Dzeko and Sergio Aguero wrote themselves into club folklore with stoppage-time goals to seal a breath-taking 3-2 victory over Queen Park Rangers on Sunday and snatch their first title for 44 years.

In a tension-wracked climax to one of the most dramatic title battles for decades, City looked doomed to failure when trailing 2-1 to relegation-haunted QPR while illustrious neighbors Manchester United were closing in on a 1-0 win at Sunderland and a 20th championship.

Wayne Rooney’s header seemed to have clinched a 13th Premier League crown for United manager Alex Ferguson, but Dzeko equalized for City in the second minute of the five added on at the Etihad, and Aguero struck gold.

The full-time whistle had blown at Sunderland, but in Manchester, with barely 60 seconds to play in the 380th match of the Premier League’s 20th season, the Argentine burst into the area to lash his 23rd goal of the campaign and spark ecstatic scenes on the pitch, the stands and everywhere else in the Sky Blue half of the football-mad city.

It was the 1,066th goal of the season, a Premier League record, and City’s 93rd, a telling statistic as they edged out United on goal difference alone.

With the Manchester sides finishing on 89 points, it was the first time the English title had been settled on goal difference and the first occasion that the top two had finished level on points since Arsenal and Liverpool had to be separated by goals scored in the 1988-89 season.

City’s nostalgic “Blue Moon” anthem had seemed more appropriate, however, when QPR, who still avoided relegation thanks to Bolton Wanderers’ draw at Stoke City, struck through Djibril Cisse and Jamie Mackie after the break to stun the hosts who had led at halftime through Pablo Zabaleta’s goal.

With QPR, reduced to 10 men after former City midfielder Joey Barton elbowed Carlos Tevez, defending like men possessed, there was desperation on the pitch and the technical area while some City fans were already wiping tears off their cheeks.

Substitute Dzeko restored hope, however, and Aguero, one of the mega-rich club’s best signings since Abu Dhabi’s Mansour bin Zayed Al Nahyan began pumping hundreds of millions of pounds into the transfer kitty, made the dream a reality.

“Five minutes from the end I did not think we could win this game. We wanted this title and we deserved to win this championship,” City manager Roberto Mancini told Sky Sports before going off to hold the trophy aloft. “After 44 years I dedicate this to all our supporters. It’s an incredible moment. I thought we could get to 2-2 and hope Sunderland could draw. It’s been a crazy season.”

Captain and central defensive rock Vincent Kompany, a 6 million pounds ($9.7 million) bargain among the half a billion pounds worth of players signed since the Abu Dhabi takeover in 2008, shared the feelings of most of the 48,000 fans present.

“I want to say it is the best moment of my life, but if I’m honest then I would say please never again this way,” he said.

“Did I give up? No, I never stopped believing. When Edin Dzeko scored to make it 2-2, it reminded me of our late goals against Tottenham and Sunderland.”

While City savored being top dogs in England for the first time since 1968, United was left to contemplate their first trophy-less season since 2004-5.

Away from the euphoria of Manchester, there was heartbreak for Bolton Wanderers who drew 2-2 at Stoke City and were relegated with Wolverhampton Wanderers and Blackburn Rovers.

Victory would have earned them another season in the top flight, but instead QPR survived to make sure all last season’s promoted sides live to fight another campaign amongst the elite.

Arsenal claimed third spot and a Champions League place with a 3-2 win at West Bromwich Albion. Tottenham Hotspur was fourth after a 2-0 win at home to Fulham and Newcastle United ended fifth after losing 3-1 at Everton.

Tottenham faces an anxious wait to see if they get another crack at Champions League football as victory for Chelsea in this year’s final against Bayern Munich would mean they take a spot in next season’s competition at Tottenham’s expense.