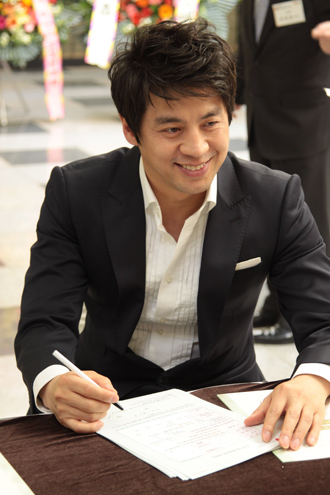 Actor Kwon Oh-joong is set to join Hallyu actors Lee Joon-gi and Shin Min-a on the upcoming drama “Arang and the Magistrate.”
“Kwon will play the character of a burly male servant to Lee’s character on the show,” said a representative from Kwon’s agency on May 14.

The drama is based on the Korean folklore of “Arang” which hails from the region of Milyang in Gyeongnam.
The plot revolves around a mischievous young ghost named Arang(played by Shin) who wants to reveal the curious circumstances surrounding her untimely death.
Lee will play the role of Eun-oh, a district magistrate who has the unique gift of seeing dead people. Lee’s character is said to be searching for his missing mother. The show is set to begin airing sometime this July. Cranking will begin in mid-May.
By Carla Sunwoo [carlasunwoo@joongang.co.kr]