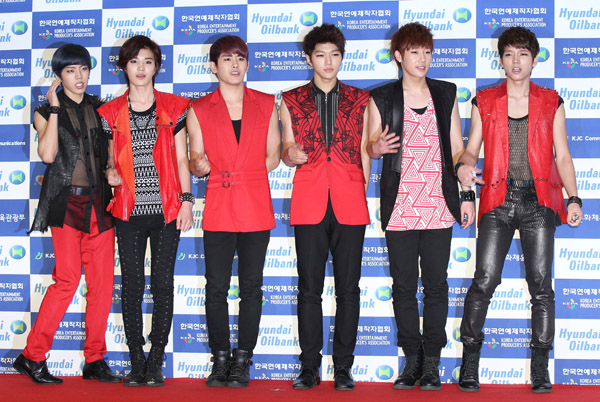 
Infinite has zoomed across the country in a five-city, one-day showcase that it completed on Tuesday.

Despite having already been to Busan, Daegu, Gwangju and Daejeon, the seven members were still exuberant and ready to go when they touched down for their final show in a helicopter at 8 p.m., in Olympic Park, southeastern Seoul.

“Actually, it was quite scary riding around in the helicopter all day. But we also managed to get some rest up in the air, traveling from one place to the next,” the band said.

At the Seoul showcase, the boys sang and took time to answer questions from the hostess of the night, comedienne Park Kyeong-rim.

Infinite emphasized that, as a Hallyu group, it wanted to create work to represent all of Korea, and that it did with title track “The Chaser,” which features an upbeat melody and emotionally charged lyrics.

The highlight of the night was when Dong-woo threw two poem-inscribed paper airplanes into the crowd.
By Carla Sunwoo