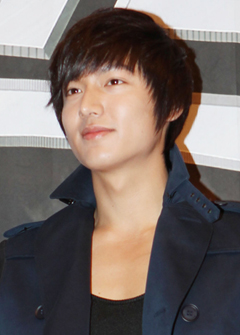 Despite the fact that Lee Min-ho’s hit SBS drama “City Hunter” has been aired in Japan on terrestrial networks from March, the show is set to be broadcasted again, but this time through cable TV.
From May 29, the action drama from last year will be shown on BS Fuji, testifying to the fame of the hallyu actor in Japan. The drama, renamed “City Hunter in Seoul” for Japanese release, just finished airing not long ago there.

“Just as ‘City Hunter’ came to an end, they started broadcasting Lee’s other drama, ‘Personal Taste,’ on TBS. Since then, Lee’s popularity has skyrocketed,” said an entertainment insider from Japan.

Away from the brown box too, Lee seems unstoppable as various media and fashion outlets want a juicy piece of the young Korean actor.

In China too, Lee’s fame knows no bounds. Back in April, in the runup to an appearance at a Chinese clothing store, Lee had to forego the event for security reasons as a thousands-strong crowd gathered to get a glimpse of the star.

In Korea, fans are holding their breath until August, when “Faith,” Lee’s next project, will air on SBS. Lee will work with actress Kim Hee-sun on the drama.