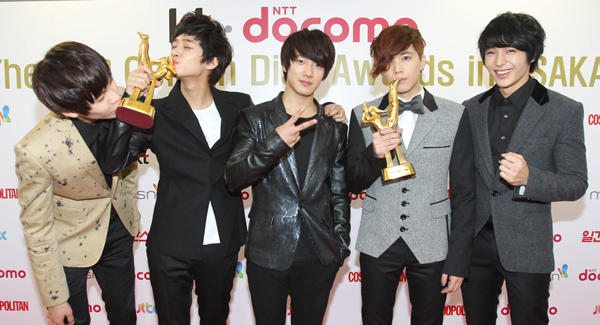 
To mark the release of its second Japanese album entitled “20,” FT Island held launch events over the weekend, meeting more than 10,000 fans in Tokyo and Osaka.

At the meet-and-greet mini-concerts, the band sang a total of five songs including “Wanna Go,” which was composed by members Song Seung-hyun and Choi Min-hwan. Group leader Choi Jong-hoon’s track “Stay” as well as “Satisfaction” were also performed by the Hallyu group.

When quizzed on the significance of the album’s title, the band said it decided on “20” because it is the average age of the band members.

The group also said it was grateful for the past two years in Japan and that it had been exactly two years since FT Island’s debut across the East Sea.

“20” sold 10,372 copies in Japan on the day of its release and became the third-highest-selling album on Oricon’s weekly chart.

The band is set to tour Japan from June 24 until July 8.