Cho Yeo-jeong keeps it steamy in ‘The Concubine’

Cho Yeo-jeong keeps it steamy in ‘The Concubine’ 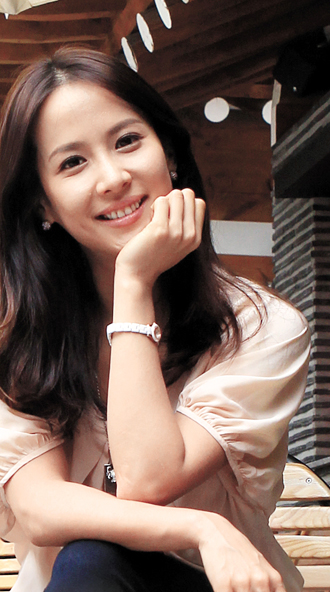 Actress Cho Yeo-jeong returns to the big screen this summer with “The Concubine.” [JoongAng Ilbo]

Actress Cho Yeo-jeong debuted as a cover girl with a heart-melting smile at the age of 16. She’s been appearing in drama series, music videos, TV commercials and films one after another ever since, but she’s been considered one of those actresses who is neither famous nor ignored.

A single film, however, gave her a chance to shine two years ago. “The Servant,” based on a Korean folktale “The Story of Chunhyang,” was a well-made love story set in the Joseon Dynasty (1392-1910), but the script was turned down by a few actresses because it contained too many sex scenes.

Cho, however, took advantage of the opportunity and proved she’s more than the cute girl next door.

Two years have passed since “The Servant” hit theaters, and Cho returns to the silver screen again with another period film, “The Concubine,” which promotes itself as a steamy drama that focuses on the tangled relationship between the king, his concubine Hwa-yeon (played by Cho) and another man who used to be in a relationship with Hwa-yeon.

Looking at Cho’s two recent films, some say she has decided to become an actress who speaks with her body. But when watching “The Concubine,” which will be released on coming Wednesday, it’s clear why Cho has decided to undress again.

The JoongAng Ilbo recently caught up with Cho to talk about her upcoming film. The following are excerpts from the interview.

Q. Why did you choose “The Concubine”?

A. Personally, I like director Kim Dae-seung’s films such as “Bungee Jumping of Their Own” (2000) and “Blood Rain” (2005). I received the scenario late last summer and I could sympathize with every single character’s desires and pain. I thought I should take advantage of this work.

It is such an intense story. The king wants a girl he shouldn’t have and the queen is greedy. Each character’s desires develop into insanity as the film unfolds. What was the most difficult scene for you?

The last sex scene was really hard. I had to portray Hwa-yeon’s desperate side because she’s been waiting for that moment for so long. I discussed the scene with the director numerous times. The scene had to look tense and dramatic, so I even learned from a traditional Korean dancer how to move my body to add tense feelings to the scene.


Your character Hwa-yeon is a femme fatale. How did you try to make the audience relate to your character?

When Kwon Yu suggests that Hwa-yeon run away with him, she turns down the offer even though she loves him so much because she knows she will die if she does. If I were in her shoes, I would make the same decision.

So I tried to focus on the strong sides of Hwa-yeon. In scenes where she cries, I even tried to look strong.


Hwa-yeon is such a complex character. Have you ever considered any other characters from similar genres of films?

I think this is a very unique character, which is hard to find in other films. So I focused on drawing the best from myself.

After “The Servant,” it must not be easy for you to appear in a film with so many sex scenes again.

These scenes are necessary for this film to understand these characters. After a recent prescreening event, one member of the audience came up to me and said, “I didn’t even have time to look at your body as I was following Hwa-yeon’s emotion.” I hope others feel the same as her.

Some of my acquaintances are concerned about whether I keep receiving similar roles, but I have no worries because I don’t want to do this type of film for the time being. Hope I can do something that’s more lighthearted next time.

The film is set in the Joseon Dynasty but the props and costumes were extraordinary.

Director wanted to use diverse props and costumes depending on each character without thinking about the film’s historical background. For this reason, Hwa-yeon sticks to natural hairdo before she turns into a femme fatale, but her hair also evolves as she changes. Watching all these props and costumes will be one interesting way to watch the film.


It’s been already 15 years since your debut. How do you feel?

Looking back at my 20s, it was hard because I didn’t have that many roles. But now I appreciate the downtime because I could have a plenty of ‘me’ time. I read a lot, went to many galleries and museums and I also learned all the things that I’ve wanted to learn.

I think it’s time for me to show what I’ve been accumulating inside of me. As an actress, I want to intrigue the audience.