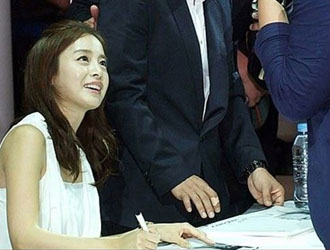 Actress Kim Tae-hee attended the Busan International Motor Show on May 28 and took part at a signing event.
Fans started queuing hours before the event to catch a glimpse of the hallyu star and to secure an autograph.

Meanwhile, one fan took a photo of the star and uploaded it online. So put together did she appear, and with no help from photoshop, that this photo prompted many netizens to claim that she was a “goddess.”

One netizen dubbed the photo, “The moment that the motor show became a fashion show.”

Meanwhile on May 27, Kim made the news for a different cause.
In a segment of the weekly newsletter for Catholics nationwide, Catholic Kim confessed to fellow parishioners that she had been selfish.

“I’ve always been proud to be Catholic and felt that I’ve had a privileged life due to my faith. Lately however, I’ve come to decide that I’ve been neglecting my duty to spread the Gospel and living a selfish life. I feel guilty for this,” said Kim.