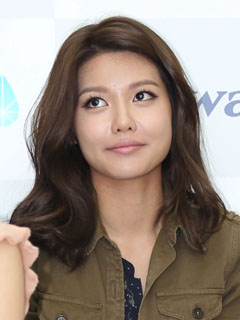 Girls’ Generation member Sooyoung will appear on an episode of the new SBS weekend drama “A Gentleman’s Dignity.”

In the episode to be aired Saturday, Sooyoung will make a cameo appearance as herself.

Sooyoung appears, flabbergasting the four friends and eliciting some laugh lines from the Kim Min-jong’s character, who had told his friends he wasn’t a fan.

In fact, the appearance was the idea of Kim Min-jong himself who is close to Sooyoung in real life.

The filming took place on May 28, and Sooyoung was praised for her professional and friendly demeanor. She took time to pose for photographs with various staff members.

The weekend drama is written by Kim Eun-sook and directed by Shin Woo-chul, who co-wrote the 2010 hit drama “Secret Garden.”
By Carla Sunwoo