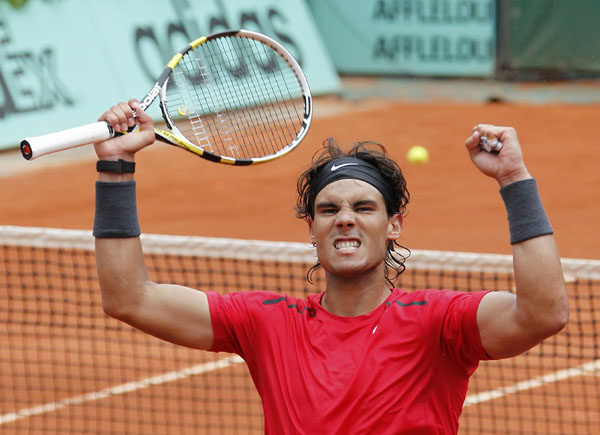 Rafael Nadal of Spain reacts after winning his quarterfinal match against his compatriot Nicolas Almagro during the French Open tennis tournament at the Roland Garros stadium in Paris on Wednesday. [REUTERS/YONHAP]


PARIS - It was about time Rafael Nadal faced some sort of test at the French Open.

Not that this one lasted all that long or was all that taxing.

Still, after dropping a total of 19 games through his first four matches - the fewest at Roland Garros in 30 years - Nadal finally found himself in an even-as-can-be set at the outset of his quarterfinal against 12th-seeded Nicolas Almagro.

While Novak Djokovic and Roger Federer have been forced to come back from two-set deficits in Paris, this qualified as a tight spot for Nadal. They went to a tiebreaker, and when Almagro’s backhand return of a 121 miles per hour serve landed out to cede the set, Nadal leaned forward and yelled, “Come on!”

Maybe it signaled excitement. Perhaps relief. This much was clear, in case anyone harbored any doubt: Nadal can summon his best play when he needs it. Moving closer to a record seventh French Open championship, Nadal reached the semifinals by beating Almagro 7-6 (4), 6-2, 6-3 to improve to 50-1 at the clay-court Grand Slam tournament.

“I played well. I applied my strategy. I tried to do my best,” Almagro said. “But he was at such a high level.”

As he always is at Roland Garros. This year, though, Nadal’s level has been even higher than usual.

Not only has he won all 15 sets he’s played, but get this: Nadal has won 60 of his 61 service games so far, 54 in a row since getting broken in the second set of his first-round victory over Simone Bolelli of Italy. He’s saved 16 of 17 break points, including going 4 for 4 against Almagro.

“If I’d not lost any set and not lost my serve, it would have been a miracle,” the second-seeded Nadal said. “It’s just impossible to achieve that.”

The next player who will try to stop him is No. 6 David Ferrer, who, like Nadal and Almagro, is from Spain. Ferrer reached his third major semifinal, but first at Roland Garros, by eliminating No. 4 Andy Murray 6-4, 6-7 (3), 6-3, 6-2 in a match interrupted by a half-hour rain delay early in the third set.

“This tournament, I think, is very special for all the Spanish players - and also for me,” Ferrer said.

Would be even better, of course, if he can get past his pal Nadal, who has won 15 of their 19 career meetings.

“Winning a match against Rafa is almost impossible,” Ferrer acknowledged. “He is in such good shape.”

The other men’s semifinal will be No. 1-ranked Djokovic against No. 3 Federer. Djokovic is bidding to become the first man to win four consecutive major titles since Rod Laver 43 years ago. Federer wants to add to his record 16 Grand Slam titles. AP