Celebrity couple to “Save The Children”

Celebrity couple to “Save The Children” 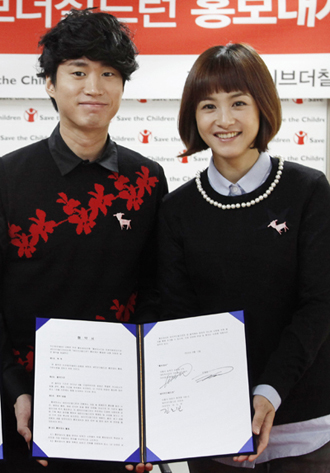 Celebrity couple Tablo and Kang Hye-jeong has taken on a noble cause.
Tablo and Kang who will celebrate their third year together later this year have become honorary ambassadors for the organization Save the Children.

The appointment ceremony took place on June 12 at the organization’s headquarters in Changjeon-dong in Mapo, western Seoul.
“I don’t think that it takes much to start doing something for the kids. It starts with little steps and a little courage which lead to changing the life of a child,” said Tablo who said he was looking forward to becoming involved with the aid organization.

“As a couple, as a father and mother, the two are interested and committed to improving the lives of children living in poverty,” said a spokesperson for the independent charity organization.

The two will take part in various promotions and donate their time toward increasing awareness for the charity and also make visits to children living in poverty in Korea.