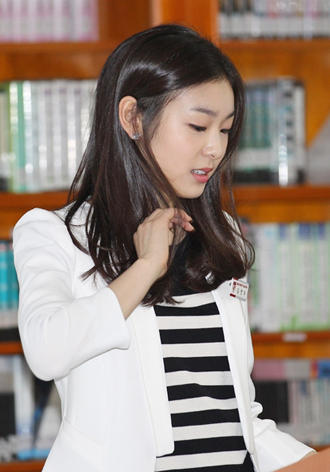 Kim’s agency, All That Sports, announced yesterday that despite the fact that Hwang had not offered her a genuine apology, the athlete decided to put the issue behind her.

The agency also announced that Kim left for China yesterday to take part in the Artistry on Ice skating event in Shanghai that will take place Sunday. The agency added she was not “running away” from th
e controversy.

The lawsuit was brought by Kim on May 30 after a comment by Hwang on a radio show May 22 about Kim’s student teaching practical. Hwang likened Kim’s practical at a girls’ high school to a “performance.”

“It is nothing but a show performed by a celebrity,” he said. “I don’t think Yu-na has attended lectures faithfully in past four years. It is very unfair for normal students who must study hard … and celebrities like Yu-na earn their degrees very easily by showing their face for a few hours at special events.”