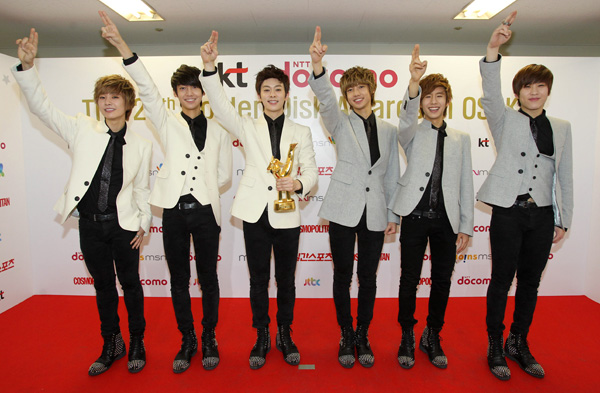 
Idol group Boyfriend took to the streets of Gangnam, southern Seoul, yesterday to meet and greet its fans.

The event held at M Stage celebrated the launch of the group’s first EP, “Love Style.”

Boyfriend’s agency announced on Friday that putting together the showcase in the bustling area of southern Seoul was a difficult feat, but the band was determined to thank and connect with its fans living in the area.

“Love Style” was released on Thursday and quickly secured the No. 1 spot on Cyworld’s music Web site in addition to coming in at the fifth and ninth spots on Bugs.co.kr and Melon.com, respectively.

The six-member boy band made its debut last year and began promoting its music across the East Sea from May.

On May 28, the band rented a submarine and held a press conference in it to mark the launch of its Japanese debut.

On June 30, the band will hold its premiere Japanese showcase at the famed Budokan in Tokyo.