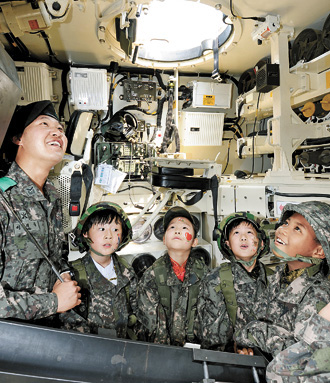 Children from multiethnic families learn about tanks inside an armored vehicle yesterday at an “Army life experience” event held in Uijeongbu, Gyeonggi. The most recently revised military service law in 2009 has made it obligatory for those with multiethnic backgrounds, including those who come from interracial families, to serve in the Korean military. The term “mixed blood,” often used derogatorily to refer to those with a non-Korean parent, has been removed from the language of the military law since last year. [NEWSIS]