Schools fear safety has been tossed out the window

Schools fear safety has been tossed out the window 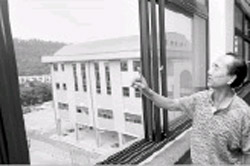 In May, a 7-year-old elementary school girl, surnamed Kim, was badly injured after falling from a window in her school’s auditorium in Mapo District, western Seoul.

The girl was locked in the auditorium after physical education class because she didn’t leave before the teacher locked the door. She was embarrassed and started shouting for help through the window.

She then accidentally fell through the window, which didn’t have any safety bars.

Many schools in Seoul don’t have any safety bars on window frames, saying that they don’t have enough funding to provide them. The Seoul Metropolitan Office of Education estimated that it needs about 8.7 billion won ($7.46 million) to install a safety system for schools in Seoul.

The office added that a total of 1,536 students in Seoul fell from school windows in 2010.

A principal at a middle school in Seoul is anxious during free time every day because the windows in every classroom from the first to the fourth floors do not have reliable safety bars.

“We should keep windows open for ventilation,” the principal said.

“But the safety bars installed in the classroom windows are only waist high to the children, causing worries that the kids might fall while they play near the windows. We applied for the necessary funding to the education office, but we don’t know when we are going to receive the money.”

The poor safety standards for schools in Seoul became controversial as more and more students have fallen from school buildings and gotten injured.

The Seoul Metropolitan Office of Education said on Sunday that 728 schools out of 1,313 elementary, middle and high schools in Seoul use either casement or sliding type windows. Of these, 227 are elementary schools.

The windows are installed without safety bars in common places, including hallways, auditoriums, gyms and restrooms.

The casement window became popular around 2000, but they are dangerous for little children as they create bigger openings than normal windows.

“Schools in Korea have relatively narrow hallways and slippery stairways compared to schools in advanced countries, and windows are installed everywhere in those areas,” Cho Jin-il, a researcher from the Korea Educational Development Institute, told the JoongAng Ilbo.

“We need to improve the safety system at schools because buildings in Korea are built higher than schools in many other countries.”