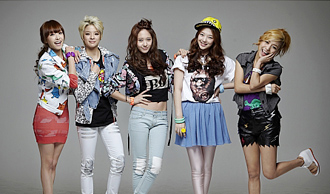 On Thursday, the 34-year-old blogger uploaded a posting titled “f(x)’s Amazing Futuristic Music.” Along with the music video, he described the band’s new song “Electric Shock” as “dripping with honey tunes and bouncing with killer b-b-beats!” He called the video “a dreamy, futuristic landscape where each member gets to belt and take center stage.” Hilton said he loved the track and adored K-pop.

Prior to the release of “Electric Shock” on June 10, the band - Victoria, Amber, Luna, Sulli and Krystal - had not released an album since its first EP “Hot Summer” in June 2011.

As soon as it was released, “Electric Shock” immediately went to the top of online charts, including Melon, Soribada, Bugs, Olleh Music and Naver Music.
From Thursday, the girl group also began promoting the album with television appearances.