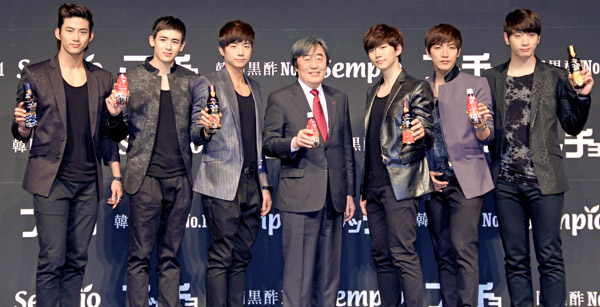 2PM will release “Beautiful,” its fourth Japanese EP, in Korea too.
Due to the album’s phenomenal success in Japan, the band has decided to release the album domestically on June 20.

The title track, “Beautiful,” is a ballad about the love of a man who would willingly lay down his life for his beloved.
The song was a hit in Japan even before it was officially released, as it was picked to be played in a television commercial for a Japanese company earlier this year. Back in April, the track was also made available on Japan’s leading ringtone Web site Recochoku and was the most-downloaded tune for a while.

Also on the EP, fans can expect to hear the song “If You Are Here,” which was composed by 2PM member Junho.

“In just one week in Japan, the record sold more than 140,000 copies. It has been the band’s biggest album so far over there and we hope that the Korean fans will enjoy it too,” said a spokesperson from JYP Entertainment.