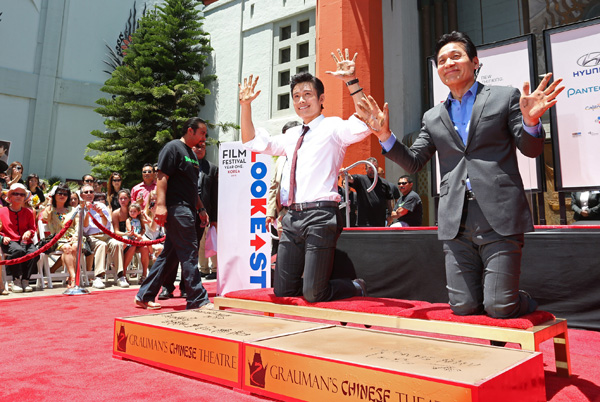 Actors Lee Byung-hun and Ahn Sung-ki have become the first Asian actors - not including Asian-Americans - to leave their hand and foot prints on the Hollywood Walk of Fame outside Grauman’s Chinese Theater in Hollywood.

The two attended the printing ceremony that took place on Saturday.

“This is truly one of the most glorious moments in an actor’s life,” Lee said. “I can’t believe I’m here. Working for the last 20 years has indeed paid off, and I intend to work even harder for the next 20 years.”

The organizing committee of the printing ceremony said that Lee was one of the finest Asian actors.

Director Kim Ji-woon, who worked with Lee for the first time in “A Bittersweet Life” in 2005 and then again in the thriller “I Saw the Devil” some five years later, was also present at the ceremony.

Kim praised Lee for his achievement in breaking into the U.S. market.