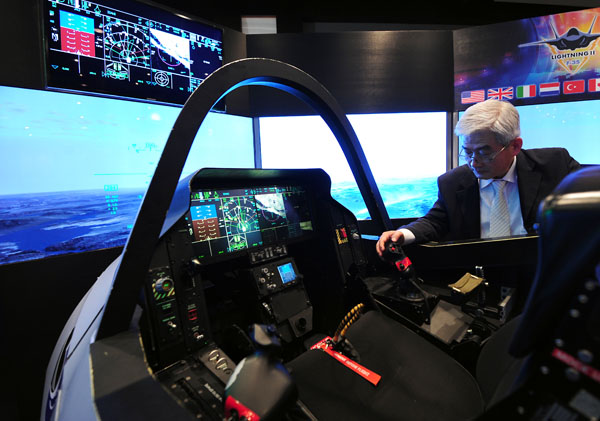 Lockheed Martin, a U.S.-based defense manufacturer and one of the three bidders of Korea’s next-generation fighter jet project, hosted an event on Thursday at Seoul’s Shilla Hotel to display the cockpit of its F-35. [NEWS1]


In a few months, Korea will make a decision to purchase 60 next-generation fighter jets in a multibillion-dollar deal, and concerns have risen over the process’s timetable, effectiveness and fairness after the bidding kicked off with a rough start.

In January, the country launched the next-generation fighter jet project, code-named FX III, requesting proposals from global builders to participate in the process.

Aimed at improving the country’s readiness and deterrent power against the North’s asymmetrical capabilities, the Defense Acquisition Program Administration, the country’s arms procurement agency, unveiled a plan to purchase 60 advanced combat fighters to defend the country’s airspace for the next 30 years by spending 8.3 trillion won ($7.24 billion). 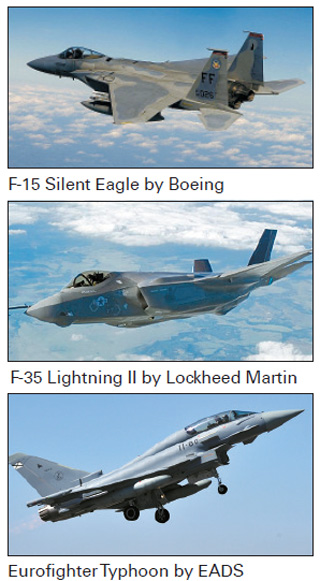 The contenders are the F-15 Silent Eagle by Boeing, the F-35 Lightning II by Lockheed Martin and the EADS’ Eurofighter Typhoon.

According to the timetable issued in January, the deadline for the bidding was set for mid-June. The Defense Acquisition Program Administration scheduled reviews on the proposals in July and evaluations and negotiations from July to September. The final decision was to be made in October.

The delay created a wrinkle in the already tight schedule. The selection was to be made in October, but it was inevitably pushed off by two weeks and is now scheduled for mid-November. In an interview with JTBC last week, Noh Dae-lae, head of the Defense Acquisition Program Administration, said, “October was a goal, but not a deadline.

“We can always delay it to best serve the national interest.”

Experts expressed serious concerns there was simply not enough time for proper evaluation. “Each of the three companies is submitting a proposal of 50,000 pages,” said Choi Jong-kun, a professor of political science and international studies at Yonsei University. “In total, they are 150,000 pages. The evaluators won’t be just reading them.

“They have to compare, contrast and reassess. And we are just talking about document reviews.”

Choi said the actual tests of the three different advanced aircraft will require even more time for proper evaluation, showing concerns about the tight schedule.

“And now with the two weeks of delay at the beginning, the decision is pushed off to mid-November,” Choi said. “And that’s just too close to the presidential election [in December].”

Other concerns were also expressed about the evaluation process as one of the bidders insisted on using simulators instead of actual flight tests. After Lockheed Martin refused to allow flight tests, the Defense Acquisition Program Administration said it will allow an evaluation using simulators for the aircraft that are being developed. That decision prompted public criticism.

In on-site performance tests, Korean pilots planned to test the jets under different conditions to assess their operational capabilities. While Boeing and EADS accepted the request for flight tests by Korean pilots, Lockheed Martin informed the Korean procurement agency that its F-35A is still under development and only American pilots can fly the aircraft.

While many complained that evaluating a fighter jet based on a simulation is like buying a car based on a catalog without a test drive, experts said evaluating defense technologies using simulators is not unprecedented, although it’s not a preferred method. But they said it could lead to bigger problems. “The emphasis is that the technology is still in the process of being worked out,” Choi of Yonsei University said. “So that means we have to take the risk of uncertainties.”

While Japan recently decided to purchase F-35s, the country is one of the joint developers of the aircraft, Choi pointed out. “The aircraft is still under development,” he said.

“So what’s more important is if it can meet the delivery time. The bigger question is if they can be delivered in time when we want them to be.”

Professor Kim Jong-ha, dean of Hannam University Graduate School of National Defense Strategy, agreed. “It is not such a critical problem that simulators are used to evaluate a system under development,” said Kim.

“But we have to seriously think about when the development of the aircraft will be completed and when they can be operationally deployed.”

Kim said the delivery time is one of the most important factors in making the selection because there can be no disagreement that the Air Force will need to follow a timeline to deploy advanced aircraft in place of its aging fleets.

Unless Lockheed Martin complies with the government’s request, it could be eliminated from the contest, said Oh Tae-shik, a senior official in charge of project management at the Defense Acquisition Program Administration, in a briefing at the Ministry of National Defense.

“Lockheed Martin is yet to give a reply on whether it will allow us to evaluate the F-35 by using a chase plane or a telemetry device,” he said. “But we cannot wait forever.”

When the bidding was first announced, rumors spread in the industry that the government already decided to purchase the F-35s and the bidding was just a formality. The Defense Acquisition Program Administration has flatly denied the suspicion. “It is true that the Air Force was initially in favor of F-35s,” Noh, head of the arms procurement administration, told JTBC last week. “But to better serve the national interest, we have decided to have the competition, and now the bidding is ongoing.”

Ensuring the fairness of the contest, Noh said all three aircraft have the equal chance to win the project.

It remains to be seen if Korea, which has long depended on U.S. weapons systems, will break the pattern in the latest project as the new, extended deadline for the bidding approaches. Experts said the U.S. fighter jets have their advantages, but the bidding should also take into account many other aspects.

Choi of Yonsei University said overcoming cognitive dissonance has played a role in past procurement decisions. With the Korea-U.S. alliance, interoperability has long been a key element, and the country ended up purchasing 74 percent of its imported arms from the United States. While political considerations are still important, Choi said the fear of having low interoperability by purchasing systems other than the U.S. programs is a cognitive dissonance bias.

“It is a bias that U.S. systems are only comparable to U.S. systems,” Choi said. “And it is also another bias that a European system cannot be operated with a U.S. system.”

Kim of Hannam University also agreed that putting too much emphasis on interoperability will undermine Korea’s negotiation power. “Of course, it will be easier in terms of training and joint operations with the U.S. Air Force when the systems are American,” Kim said. “But stressing the comparability so much during a bid will not benefit Korea’s position.”

Experts also said the project should be approached with a long-term perspective, and offset factors are also an important aspect. For example, Kim said, EADS had proposed to deliver the first 10 units in flyaway condition and assemble the rest 50 in Korea. “That will be a great opportunity for Korea’s fighter jet development process,” he said.

“Korea has advanced shipbuilding and automobile industries,” Choi said. “But we do not build our own fighter jets. Taking that into an account, offset factors are an important category.”

“We need to buy the new jets because we have aging ones,” Choi said. “But for a buyer, it is important to maintain a strategic ambiguity.”

“This is an expensive project that will be funded 100 percent with tax money,” Choi said. “It is never too much to emphasize the importance of having a fair, objective and transparent selection.”