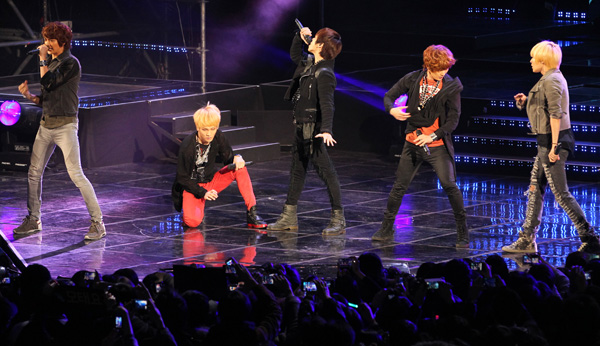 
SHINee has successfully wrapped up its “SHINee World 2012” tour in Japan on July 1, having performed for 200,000 fans in total.
The final leg of the Japanese tour, which kicked off in April, was in Hiroshima.
The band performed at the Hiroshima Green Arena for two nights from June 30 to the following day and the fans were treated to two-and-a-half hours of dynamic performance.

As well as singing its previous hits and new single “Sherlock” released in Japan back in May, the band members took to the stage individually as well as in unison, singing a total of 29 songs.

The tour kicked off in Japan on April 25 in Fukuoka and made its way around six other cities: Hokkaido, Nagoya, Osaka, Kobe, Tokyo and Hiroshima, consisting of 20 concerts in all.
The band’s first solo concert in Japan set a new record for the highest number of audience for a K-pop band.
By Carla Sunwoo [carlasunwoo@joongang.co.kr]