MBlaq’s Cheondung writes his own song

MBlaq’s Cheondung writes his own song 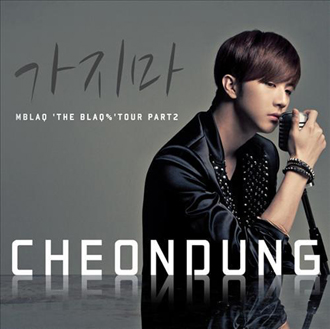 Cheondung of boy group MBlaq wrote his own solo song for the group’s upcoming Asia tour.

At midnight on July 3, Cheondung released the digital single “Don’t Go” as a soundtrack for MBlaq’s “The BLAQ% Tour,” Part 2.

Previously, G.O. and Mir of MBlaq formed a duo for the single “Wild” as Part 1 of the tour album.

The single “Don’t Go” was written completely by the singer. Cheondung’s passion and confidence for the Asia tour is evident in the track.

“The new releases for the tour were only made possible through the hard work of MBlaq members,” said JTune Entertainment, MBlaq’s agency.

Cheondung’s whole performance for “Don’t Go” will be performed exclusively on the MBlaq Asia tour, which kicks off in Seoul on July 21.