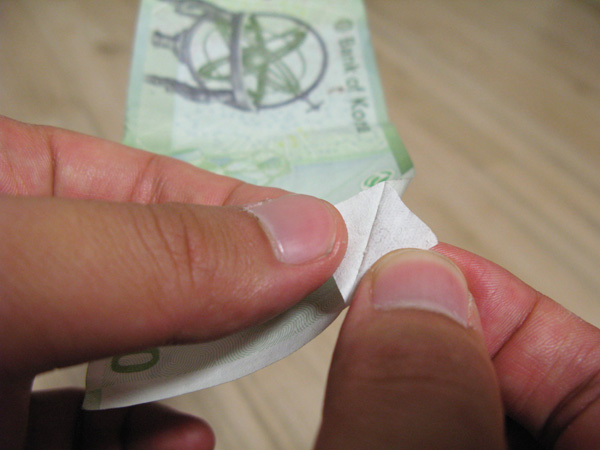 A 10,000 won (8.81dollar) bill separates into two sheets after being soaked in water for 30 minutes, the first step in producing a counterfeit bill. A string of counterfeit bills in Seoul have been reported recently. By Kim Min-sang


“I never would’ve guessed it was fake,” said a convenience store worker yesterday who had just accepted a 10,000 won ($8.81) counterfeit bill from a JoongAng Ilbo reporter for a 1,000 won pack of gum and gave him the change.

The 10,000 won fake bill was produced for the story by the JoongAng Ilbo with cooperation from the police after applying a method learned online.

The method required they first soak a real 10,000 won bill in water for 30 minutes and separate the front and back side to produce two bills. Then attach each separated side to a printed-fake bill.

“From time to time there have been occasions when I suspected customers are paying with fake bills,” said a store owner surnamed Park. “But worried that I might upset them, I find it challenging to check them for authenticity.”

Reports of counterfeit bills have popped up in recent days. Police have launched an investigation into the spread of counterfeit money widely distributed in Seoul over the weekend.

The police are looking for three suspects on charges of making counterfeit bills and using them 27 times. With the forged notes, the three succeeded in buying goods worth 1.9 million won from convenience stores.

Over 4,200 fake notes produced with the same process found online were discovered last year, up 43.2 percent from the previous year. With non-fluorescent paper, whose texture is similar to that of a real bill and can easily be purchased, the production of fake money has become easier in recent years.

Counterfeit-currency crimes in the country have increased every year, according to the Korean Institute of Criminology.

The number of fake-money crimes was 300 per year on average in the early 2000s from 42 cases reported in 1967. The numbers show a strong increase over the past four decades when 4,392 such cases were reported in 2009.

“After the financial crisis in 1997, the number of counterfeit crimes jumped to today’s number with the spread of color printers, scanners and the Internet,” Hwang Ji-tae, researcher at the Korean Institute of Criminology told the JoongAng Ilbo.

Despite the soaring number of counterfeit crimes, however, less than five in 100 suspects are arrested by the police.

In 2009, only 4.19 percent of money counterfeiters were arrested, much lower than the 95.7 percent arrest rates for violent crimes.

The police attribute the low arrest rate to the number of transactions the counterfeit bills go through without being spotted first.

“Fake notes usually turn up at banks after being passed by people who didn’t know they were fake,” said a police officer.