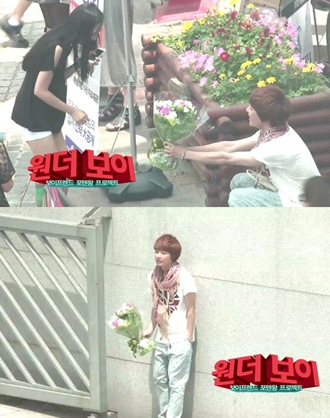 Jeongmin from Boyfriend has suffered a blow to his self-esteem by being shooed by a security guard at a women’s college.
While on a mission to win over fans on the SBS MTV program “Wonder Boy,” the boy group member set out with a bouquet of flowers in order to serenade a passerby within the campus of women’s college.

However, the wooing was cut short as the security personnel rushed to shoo away the Boyfriend member.
The episode aired on July 9 and within the show, the members also confessed to who they thought was the group’s best looking member.

Last month, in another courageous act to generate publicity for itself and its new EP “Love Style,” the group held an impromptu showcase on the streets of Gangnam in southern Seoul.
While in Japan, the group thought outside the box when it hired a submarine and held a press conference to make its debut on May 28.