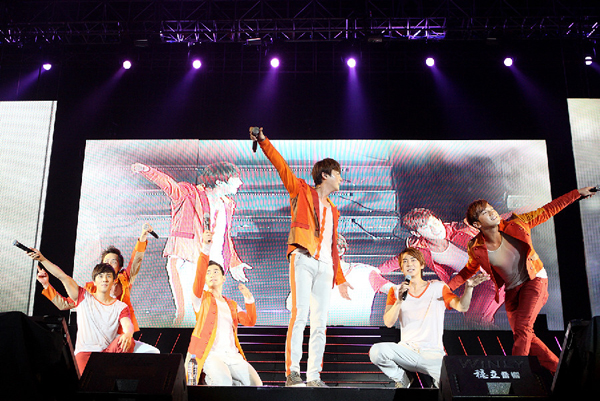 
Shinhwa took to the stage one last time in Beijing on Saturday, bringing its Asian tour to an end.
The group’s first Asian tour since 2007, “The Return” tour, consisted of 10 performances in eight cities around Korea, Japan, China, Taiwan and Singapore.

In Beijing, more than 8,000 fans attended the event where the group sang its hit songs from the last 14 years.

“Do you love us? We love you too!” shouted Lee Min-woo. Meanwhile, Jun Jin said that despite the language barrier, “We are all united in our hearts.”

The fans also treated the group to a birthday cake ahead of Lee’s birthday, which falls on July 28.

Jun, who is recovering from a back surgery, still took part in the concert but had to forego dancing.

When the two-hour show came to an end, Kim Dong-wan promised Chinese fans that next year, “We hope to be back and to talk to you in Chinese.”