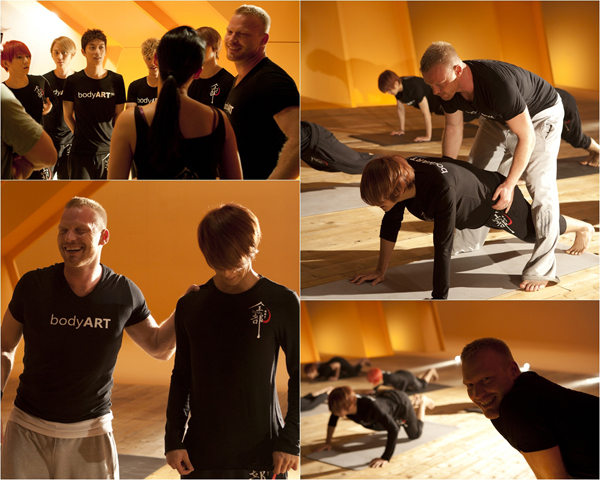 
The idol group best known for its “animal like” physique, Beast, is set to impart its fitness tips in a DVD produced by bodyART.

The fitness program was developed in 1999 by Swiss gymnast and dancer Robert Steinbacher and is a combination of yoga, pilates, tai chi, basic dance and stretching.

The dance and fitness instructor, who counts Janet Jackson and Toni Braxton as some of his clients, came to Korea for the first time last month, and met with the band to film the fitness program, which will go on sale in Japan from September.

“Steinbacher is an amazing choreographer who is well versed in all sorts of fitness routines. He choreographed some new moves for us, and it was intense,” said Yoon Du-jun from the band.

Back in April, Steinbacher’s company announced that it had chosen Beast to represent the program.

“To look slim yet toned is the ideal state of the body, and we believe that Beast members showcase the perfect bodies that result from our workouts,” a bodyART representative said.