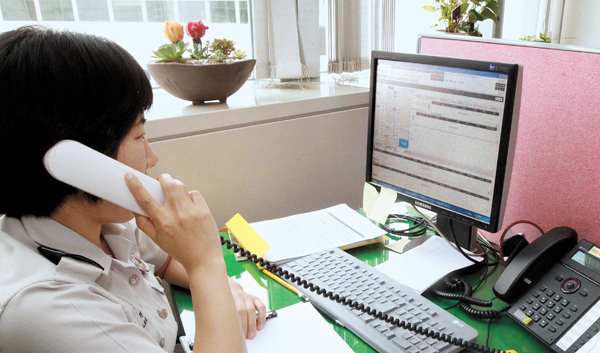 A counselor at a 117 call center run by the Busan Metropolitan Police Agency receives a call from a student suffering from school violence. A wave of suicides related to bullying prompted the establishment of counseling hotlines. By Song Bong-geun


Since the National Police Agency, the Ministry of Gender Equality and Family, and the Ministry of Education, Science and Technology jointly launched a hotline in May to assist victims of school bullying and harassment, 8,634 cases have been reported to the call centers, according to an analysis by the JoongAng Ilbo.

Elementary school students made the most calls, followed by middle school students. Some 250 reports of sexual assault or physical violence prompted immediate action by the police.

The 117 call centers across 16 police agencies, operated 24/7 with 12 counselors, were established after a wave of suicides related to school bullying. In the city of Daegu alone, 10 students have attempted suicide since December 2011.

The hotline, which does not disclose the identities of callers, hopes to show students that they are not alone and have effective means to stop bullying at school.

“One of my classmates has been beating and bullying me and I don’t want to go to school,” a sixth-grade student said over the hotline operated by the Gyeonggi Provincial Police Agency on June 30.

Immediately after the conversation ended, a counselor called the student’s teacher, explaining what the boy had said, and asked for close observation of the claim. The counselor also contacted the local police.

A week earlier, the mother of a 16-year-old student from Busan contacted the call center over repeated bullying incidents.

“My daughter has been beaten by classmates. She came home with bruises all over her body. What should I do?” the mother asked. The call was made to the 117 call center at the Busan Metropolitan Police Agency.

Police Sergeant Kim Eun-hee, who received the call, felt the case was grave enough to seek help from the police.

The victimized girl has been receiving therapy for a year due to depression caused by school violence. The police are investigating the case and the alleged teenage assailants are being questioned.

The large number of calls to the center brings into question whether schools are doing enough to stave off violence. The shortage of professional counselors could be one of the reasons why students are taking advantage of the hotlines.

Among 7,271 schools with more than 101 students, only 403 counselors are employed. The government plans to add 500 more counselors nationwide in September, but some question whether the number is large enough to change the status-quo.

“Countries that have toughened their punishment measures to fight school bullying have all failed to tame the violence,” said Hwang Sun-joon, director of the Seoul Education Research and Information Institute.

“Countries in northern Europe that have a tradition of emphasizing civic consciousness are free from school bullying problems. We may have a lot to learn from them.”