Peppertones’ concert sells out in one minute

Peppertones’ concert sells out in one minute 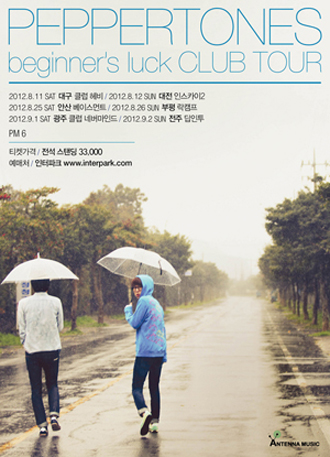 Antenna Music announced on July 11 that the indie band Peppertones’ concerts in Daegu and Daejeon sold out within a minute of going on sale, despite the fact that there was still a month to go until the big day.
The group will kick off its “Beginner’s Luck Club Tour” on Aug. 11 in Daegu before making its way to Daejeon, Ansan, Incheon, Gwangju and Jeonju.

“The two want to meet with more fans and they’ve taken the time to plan every minute detail of the concert,” said a spokesperson from the group’s agency.
The duo’s last concert, “Beginner’s Luck Live” consisted of eight shows and was also sold out long before the concert kicked off.