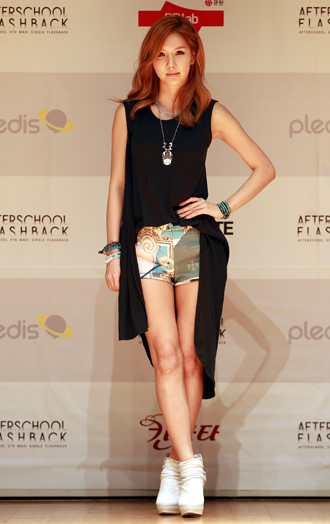 To fill the void left by the girl band’s former leader Kahi who “graduated” from After School last month, it has designated Jung-a as the new leader.
Jung-a made the announcement herself when she appeared on SBS variety show “Mighty Heart” on Tuesday night.

According to Pledis Entertainment yesterday, the girls gathered and after much discussion, decided that the 28-year-old, as the eldest member of the eight-member group, should be the rightful leader.
“As all members are unified in their decision, we have no doubt that Jung-a will make a great leader,” said the agency.

Meanwhile, the girl group, which released is fifth single “Flashback” in June after a year away from the K-pop scene, has been making headlines for losing as well as gaining a new member.

Before Kahi’s departure in June, the band recruited a new member named Ga-eun. The 17- year-old newbie was picked back in April not only for her dancing and singing skills, but also because she speaks Japanese.

After School is unusual in that it segments its performance history into “terms” and picks a new member when it moves from one segment to the next.
By Carla Sunwoo [carlasunwooau@yahoo.com.au]