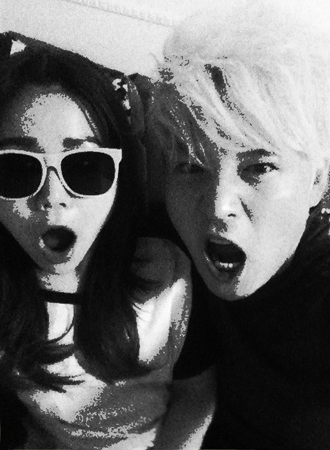 Shindong and his girlfriend

On Wednesday, Super Junior member Shindong uploaded a picture of him and his girlfriend titled “First time uploading.”

Although Shindong has publicly spoken about his girlfriend and posted a picture previously, fans were again stoked by the glimpse into his personal life.

In the picture, the couple are making faces while the woman is wearing sunglasses.

“You guys look so cute together,” said a fan. Others even said they look alike, while some asked for a better picture so they could get a good look at Shindong’s girlfriend, supposedly named Nari.

In 2010, Shindong announced on a TV show that he was dating a non-celebrity and declared his intention to marry her. Last December, Shindong posted a picture of the couple posing as dwarves at a ski resort; Nari’s face was covered with a hoodie.

In February, he posted a photo of a congratulatory plant sent by Nari with a wreath that read: “If you go boom, I’ll marry you; if you go bust, the engagement is off.”