Beast enthralls at landmark in Seoul

Beast enthralls at landmark in Seoul 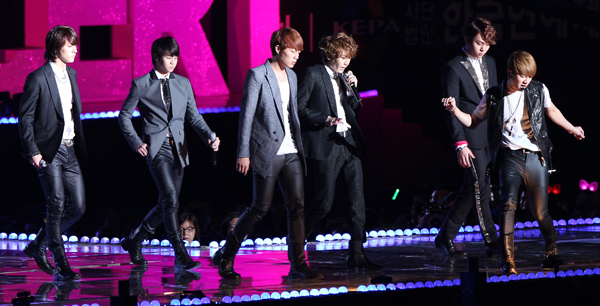 
City dwellers and about 4,000 fans of boy band Beast were in for a treat Thursday night as the group performed live at Gwanghwamun Square, central Seoul.

The performance was to promote the group’s new single “Beautiful Night,” the first EP release by the group in more than a year.

Fans queued for 12 hours to secure a spot for the show that kicked off at 11 p.m., and after the boy band announced “party hard,” it got straight into business, performing five songs including a solo piece by Yang Yo-seob.

The mini-concert was recorded for airing Sunday on “Popular Songs” on SBS, however, only the title track “Beautiful Night” of the EP “Midnight Sun” will be televised on the music chart show. Meanwhile, the band’s first TV comeback performance hit the airwaves last night on KBS 2TV’s “Music Bank.”

Ahead of its comeback, more than 350,000 fans from around the world uploaded congratulatory messages for the band from landmarks in their home countries.