‘Thieves’ stealing the show in Korea

‘Thieves’ stealing the show in Korea 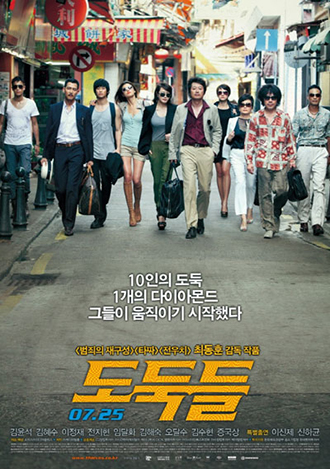 Korean action movie “The Thieves” has set a box office record again with more than eight million viewers, becoming the 10th-most-popular Korean movie of all time as of yesterday.

According to statistics released by the Korea Film Council yesterday, the movie has been seen by 8,098,952 moviegoers since its release on July 25.

Many industry watchers say that “The Thieves” will likely attract 10 million viewers around next week with the current pace of ticket sales.

The film overtakes Hollywood super hero film “The Avengers” as the most-watched movie of this year, raking in more than half of the local box office revenue. It has also surpassed Hollywood blockbuster “The Dark Knight Rises.”

“The Thieves” garnered a lot of attention before its release as the action-thriller stars A-list actors and actresses Jun Ji-hyun, Kim Hye-soo, Kim Yun-seok and Lee Jung-jae. The plot centers on a gang assembled in Macau by legendary thief Macao Park (Kim Yun-seok) to steal a $20 million diamond.