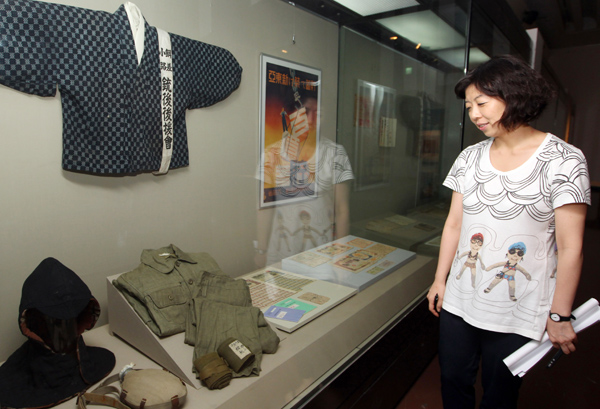 An official who organized the exhibition “The 100 Years of Koreans in Japan” checks the display yesterday at the Seoul Museum of History in Jongno District, central Seoul. [YONHAP]


The Northeast Asian History Foundation has put together a special exhibition to shed light on the lives of Korean-Japanese who crossed the Korea Strait to Japan in desperate need of money during Japanese colonial rule from 1910-45, titled “The 100 Years of Koreans in Japan.”

The exhibition kicked off yesterday, five days before Korea’s Independence Day on Aug. 15, at the Seoul Museum of History in Jongno District, central Seoul, and ends Sept. 30.

“Even though the Korean-Japanese acted as a bridge connecting Korea and Japan, they were not properly appreciated by either country,” the foundation said in its release. “Japan discriminated against them and Korea was indifferent to them.”

“It’s pitiful that there isn’t much understanding in Korean society about the lives of Korean residents in Japan though they contributed greatly in boosting the two countries’ relations for over 100 years.”

According to the foundation, the exhibition will spotlight the history of the Korean-Japanese - how they arrived in Japan, what discrimination and pressure they faced over time and their current status in Japanese society - by displaying historical documents, photos and artifacts that reflect their lives over the span of 100 years.

Some of the items on display will include travel passports used in the early 1900s. The exhibition is jointly hosted by the Seoul Museum of History and the History Museum of Japanese-Koreans.

There will also be 174 pieces of nishiki-e, Japanese woodblock prints, on display showing how Japan has distorted history through its artwork.

The prints were collected by Kang Deok-sang, director of the History Museum of Japanese-Koreans, over four decades and it is the first time that the prints will be on display in Korea.

Celebrating the opening day, there was a film symposium where experts including Professor Lee Sung-si from Waseda University discussed Korea-Japan relations through the eyes of Korean-Japanese. Eight documentary films, including director Oh Choong-kong’s “Hidden Nail Marks,” depicting the Korean massacre after the Great Kanto earthquake in 1923, will be screened from today until Aug. 17.

Unlike other immigrants in Japan, Korean-Japanese are difficult to distinguish from native Japanese given their physical appearance.

“After World War II, Korean-Japanese people used Japanese names to mask their nationality and desperately tried to integrate into Japanese society,” Professor Lee said. Lee is also a Korean-Japanese born in Japan in 1952.

“For instance, when I was young, I came to realize that the language that my [Korean] parents were using was not standard Japanese, and I developed resistance to the inaccurate words they used at home,” he said.

However, after the onset of globalization in the 1970s, the Japanese government began to discuss granting permanent residency to expatriates. Accordingly, their social status in society rose.

However, despite the changes, Korea still discriminates against Korean-Japanese, Lee said. “Many Korean-Japanese have a similar experience when we pass through immigration at a Korean airport,” he said. “A native Korean official interrogates us about why we can’t speak Korean and even scolds us about it.”

The discrimination against foreign immigrants is happening not only in Korea, but all over Northeast Asia, Lee said, which could be overcome through mutual cooperation among countries in the region.

“East Asian countries tend to be really sensitive toward what their people are suffering overseas, but they are really insensitive to what foreign immigrants are suffering from in their own land,” he said.

“In an era of immigration and diaspora, the matter of foreign workers and immigrants should be handled as an issue that affects all of Northeast Asia.”