Psy on ‘Gangnam Style’ and the beauty of being ‘B-list’

Psy on ‘Gangnam Style’ and the beauty of being ‘B-list’ 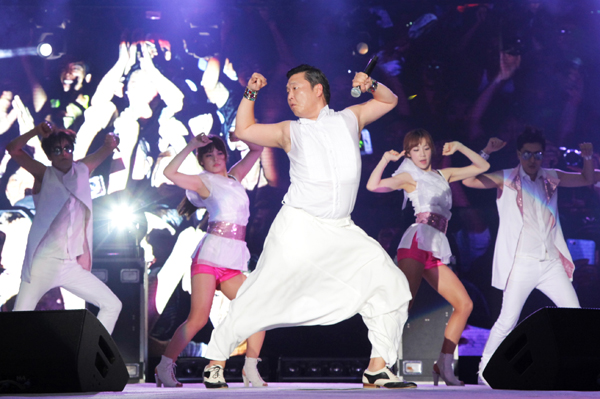 Psy is in the spotlight with “Gangnam Style.” “I believe it is more appropriate to say ... people in the United States find several parts of Psy’s new music video funny and ridiculous,” he says. Provided by Expo organizers


A countrified man who doesn’t look like he belongs in an affluent, hip town like “Gangnam,” southern Seoul, rests under a parasol at a children’s playground as if he’s at a beach and says, “Oppan Gangnam Style.” The man appears again wearing swimming goggles while playing inside a public bath as if he’s in a luxurious swimming pool and again says, “Oppan Gangnam style.” The man continues to look cool in every scene, but not quite pulling it off. He becomes more ridiculous as he mimics riding a horse in a crosswalk. This is the popular “horse-riding dance” in Korean rapper Psy’s new music video “Gangnam Style.”

Psy, managed by YG Entertainment, released the album “Psy 6 Part 1” last month, featuring “Gangnam Style” as the title track. The music video, released the same day, has gone viral on the Internet getting mentioned by music celebrities such as T-Pain and Robbie Williams as well as being reported on by news media such as CNN and the Wall Street Journal.

Psy has been receiving many interview requests from U.S. media, and after his solo concert tomorrow at the Jamsil Sports Complex, Psy will be flying out to Los Angeles to meet with Justin Bieber and his agent about Bieber possibly releasing a version of the song and video.

The JoongAng Ilbo did a telephone interview with the 35-year-old hip-hop artist, whose real name is Park Jae-sang, earlier this month.

Q. Do you feel the popularity you’ve been receiving recently?

A. When I performed “Gangnam Style” at the Yeosu Expo on Aug. 3, I felt it big. The audience who came to watch the show that night included both younger and older generations, but they all seemed to know the song very well as they shouted out the song’s chorus “Oppan Gangnam style,” which repeats many times. I was very surprised at that. One lady who looked like she’s well up in years even followed the “horse-riding dance.” I then felt the popularity of the song and dance was not limited to a certain age group or online.

How do you feel about all the international attention “Gangnam Style” has been getting?

I read many local news reports that “Psy has seized the United States,” but I’m very embarrassed. It’s certain that I am very pleased and happy with it, but I believe it is more appropriate to say that “people in the United States find several parts of Psy’s new music video funny and ridiculous.” I think foreign news media covering the story about my music video is similar to local news media briefly introducing some funny topics at the end of the news.

What do you think attracts people to your new music video?

I think I was able to receive a lot of attention, especially on YouTube, thanks to many K-pop stars who paved the road before me. Many foreigners abroad already know so much about K-pop because of them. I think that when foreigners think of K-pop stars, they think of idol groups such as boy bands and girl groups. I fall into the K-pop category, but I’m neither an idol nor handsome. Yet I’m quite unusual and somewhat funny. I think that’s why I grabbed attention.

How do you compare your popularity now with your debut song, “Bird,” which was also a mega hit?

I think the biggest hit song so far is “Champion,” but the song got more and more popular over the years, being featured in two of the latest World Cup Games. But the first song that fired instant popularity was my debut song “Bird” in 2001 and probably the second is “Gangnam Style.” Both of them have unique dance moves that gained more attention than the song and chorus that became fad words.

Some say your songs are lowbrow and vulgar. How do you respond to that?

I think everyone has their own place and roles in the world of singers as a product. I think that the role for me is the B-list.

I wonder how many A’s there are in this world. I believe most of us belong to the B-list. That’s why many people can sympathize and experience catharsis through B-list singers like me.