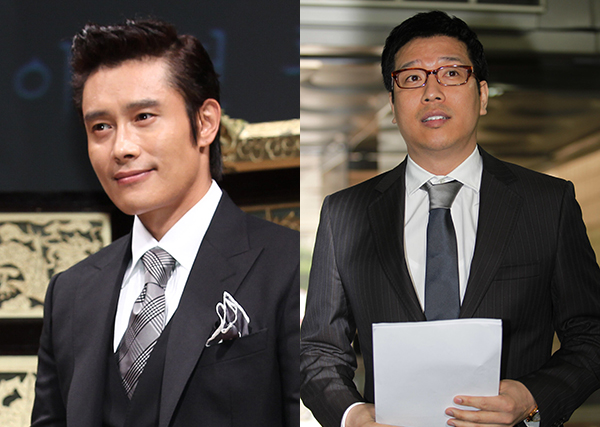 
After admitting that he was indeed seeing actress Lee Min-jung, Hallyu actor Lee Byung-hun,left, has decided to sue entertainer and former baseball player Kang Byung-kyu for making fun of his love life.

According to a spokesperson for Apex law firm, Kang has soiled their client’s image on Twitter since Lee announced Sunday that he is dating the actress 12 years his junior. “As well as implying that Lee Byung-hun has gotten Lee Min-jung pregnant, he keeps referring to Lee Byung-hun as a ‘pervert,’” the spokesperson said.

Since both Lees confirmed the dating rumors, Kang has made an array of comments online.

When Lee Byung-hun used his Web site to tell fans he had “found someone very special,” Kang countered by tweeting, “Another special person? Just how many special people have you found so far?”

Ever the active twitter user Kang told his followers that a movie about the dynamic love life of Lee would make an interesting film.

Meanwhile, netizens seem to be on the side of Kang, with many of his 17,000-plus followers cheering him on.