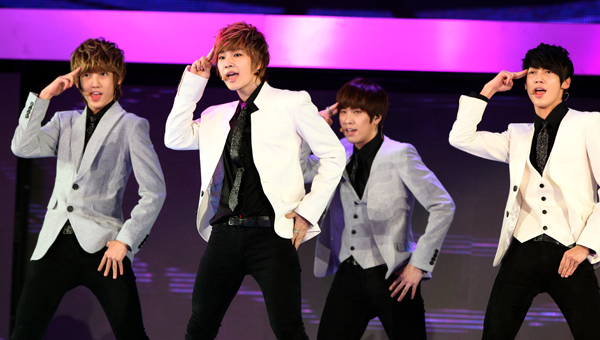 
Boyfriend’s Japanese debut EP “Be My Shine” reached No. 1 on retailer Tower Records’ daily chart when it was released Wednesday.

The song was co-written by Sweet Tunes who has written hits for the likes of SS501 and Infinite, and famed Japanese composer Matsui Goro.

Boyfriend arrived on the Japanese music scene in late May by hiring a submarine and holding a press conference in it.

While in the vessel, the K-pop group spoke about its first Budokan showcase, which was held in June in front of some 250 members of the press.

When the press asked about the band’s name, the members said: “It means that we want to be everyone’s ‘boyfriend.’” More than 40,000 fans attended the “First Date With Boyfriend,” at the famed concert hall on June 30.

The event was staged to give the boy band the opportunity to meet and communicate with Japanese fans. Of late, the group was among seven K-pop acts in a K-Dream Live concert at the Tokyo Dome on July 29.