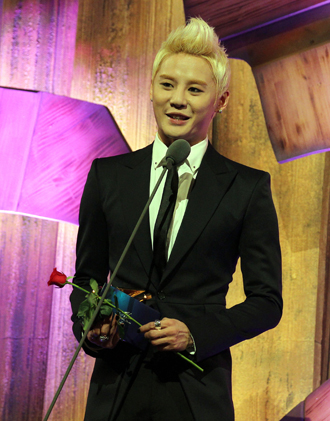 The composer behind Kim Jun-su’s latest English song, Bruce Automatic Vanderveer, has compared Kim’s talent to the likes of Michael Jackson via Twitter.

On Wednesday, the U.S. composer who counts Christina Aguilera, The Wanted and Leona Lewis among his clients praised the K-pop singer. “Jun-su reminds me of Michael Jackson. Incredible and natural ability like Michael had,” Vanderveer gushed.

The American musician based at Sony Music also compared the K-pop talent to mainstream American acts and claimed, “Jun-su is a natural, better than most artists. Jun-su’s got an incredible voice. He really is ready for America!”

Kim’s latest song, “Uncommitted,” recently released in Korea, is sung in English and the work of Vanderveer. The tune is of the urban-pop genre, and along with the accompanying video, was produced in America.

In early July, Vanderveer said Kim “sings with his whole heart” and gave him props for eagerness. The recording was done in one day instead of two.