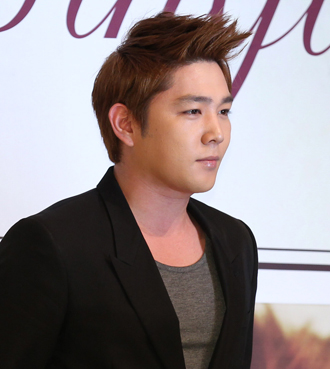 Super Junior’s Kangin and Cho Shin Sung’s Sungmo have been cast to play the lead in the Japanese rendition of the hit drama-turned-musical “Palace.”

The press event took place on Tuesday, and the two K-pop stars were present to share their thoughts on being cast to play the protagonist Lee Shin.

Sungmo, who appeared in the musical last year, said that due to his experience, he isn’t too nervous about the role.

“As it’s my second time, I hope to portray an upgraded version of the character,” Sungmo said.

Meanwhile, Kangin said that as a rookie, he will be giving it his all.

“I want it to go off from day one,” the Super Junior member said. “It will be a chance to see a side of me like never before.”

The 27-year-old said that his friend Yunho from TVXQ, who had also appeared in the 2010 performance, had helped him out during rehearsals.