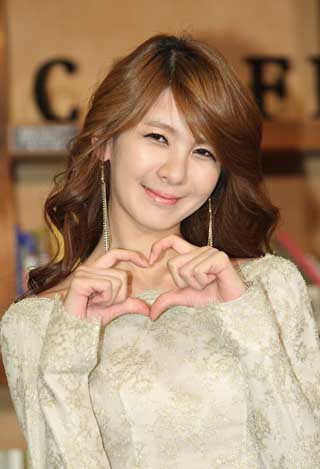 Former Playboy bunny and actress Epani is pregnant, four months after she tied the knot with musical actor Seo Sung-min.

The 26-year-old entertainer told eNews on Tuesday that despite being pregnant with her “honeymoon baby,” she will continue working for the time being.

This year has been an eventful year for the young mother, who has a 5-year-old son from a previous marriage.

On Jan. 31, Epani was proposed to on stage of the musical “Let’s Go to the Rose Inn,” in which she was starring in at the time.

During the curtain call at Venus Hall in central Seoul, Seo jumped onto the stage, catching Epani by surprise, and proposed to her in front of the crowd.

Then in May, Epani announced through her Cyworld page that the two had tied the knot back in April in a low-key ceremony abroad.

“We got married in April at a resort in Cebu in the Philippines. To the fans, I’m so sorry that I’ve only revealed it now, but we wanted a quiet ceremony,” Epani said.