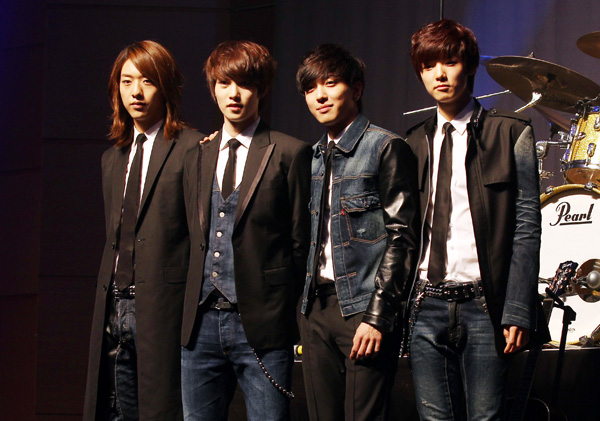 
Just a day ahead of the release of its new EP “Code Name Blue,” CN Blue debuted the title track “Time is Over” at the Mezamashi Live concert hosted by Fuji TV.

At the Japanese outdoor music festival on Tuesday, the K-pop boy band thrilled fans with a sneak preview.

The teaser seems to have been effective as the newly released album topped the Oricon Daily chart the following day.

The song in question was written by lead vocalist Jung Yong-hwa after watching the film “Avengers.”

“We knew it’d be a hit because at the concert, fans were already singing along,” said a spokesperson from FNC Entertainment.

The boy band’s triumph comes at a time where there is much tension between Korea and Japan due to the dispute over the Dokdo islets.

Just days earlier, Choi Si-won from Super Junior was singled out by Japanese media for his “insensitivity” in claiming that Dokdo is Korean territory, despite the fact that he and his band have a large Japanese following.