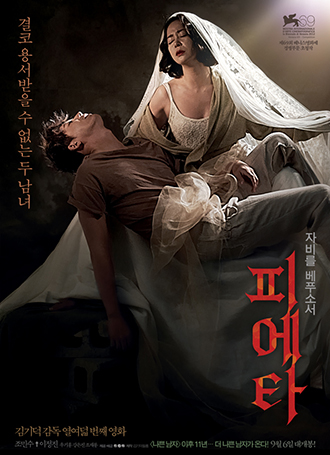 At this year’s Venice Film Festival, “Pieta” will represent Korean cinema as it competes in the Golden Lion Prize segment, which picks the best film of the year out of 18 titles.


Director Kim Ki-duk attended a press conference for his movie on Aug. 29, the day that the Italian film fest kicked off, and answered questions in regards to the Korean film that broke the seven-year dry spell at the renowned event.
This year marks Kim’s fourth representation at the world’s oldest film festival.

There are two other representing Korea this year: “The Weight” and “Invitation,” but they are presented in the non-competing segments.

The ceremony will draw to an end on Sep. 8 and the winner will be awarded with the Golden Lion Prize.
The film opens in Korea on Sep. 6.
By Carla Sunwoo [carlasunwoo@joongang.co.kr]